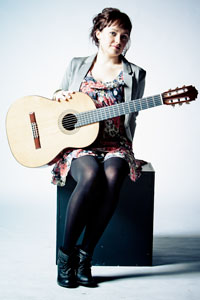 Adele Neilson has been playing the guitar since the age of eight and has become one of Scotland’s vibrant performers after obtaining an undergraduate scholarship at the Royal Scottish Academy of Music and Drama in 2004.  After five years of studying between the RSAMD and the Conservatorio de Mantova, she gained a Distinction for her Postgraduate Diploma in 2009.

Since graduating, Adele has given recitals throughout Europe including various parts of the UK, Italy and Spain. She has performed regularly as part of The Edinburgh Festival Fringe, The Merchant City Music Festival and The Dundee Guitar Festival both as a soloist and chamber musician.

Adele currently teaches guitar at St George’s, Erskine Stewart’s Melville Schools and is a Guitar Lecturer for the Royal Conservatoire of Scotland’s Junior Department.  She has directed many ensembles and orchestras including the RSAMD Guitar Orchestra, RCS Junior Guitar Ensemble and the Strathclyde University Guitar Ensemble.  Adele was recently appointed as an adjudicator for the British BMG Federation and continues to write articles on classical guitar for their newsletter which promotes fretted instrument playing.