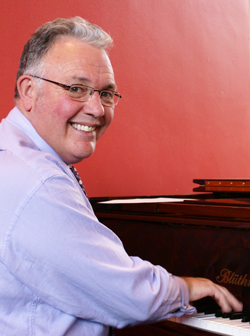 Peter began his teaching career in 1993 teaching music in the City of Edinburgh. In 2000 he joined the music staff of St. George’s School for Girls teaching music at all levels up to Advanced Higher music with additional responsibilities for coordinating Music in the Lower School and directing the Lower School musicals. In 2001 he formed the school’s Senior Jazz Band which has performed in Europe, Canada and America and which he still directs today along with the Senior Choir. Peter is also responsible for coaching and accompanying students for both internal and external examinations.

Before he started teaching in 1993 Peter was a professional singer performing a variety of leading roles in operas which included La Boheme, Carmen, Barber of Seville and The Vanishing Bridegroom, by Judith Weir, which he performed at The Royal Opera House, Covent Garden. He has also appeared in the world premiere of the Inuit folklore opera Tornrak (which he performed in Canada), the musical Wolf of Badenoch for Scottish Opera and The Martyrdom of St Magnus, which he recorded with Music Theatre Wales and the SCO. Peter has also taught singing at the Royal Conservatoire of Scotland (formerly RSAMD) and coached singers of The National Boys’ Choir of Scotland with which he still has a close association. In 2015 Peter was appointed as Head of the Music Faculty/Director of Music at St George’s School for Girls.