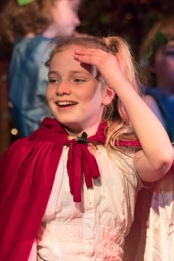 For the most part, my website letters (or “blogs”, as our marketing manager insists on calling them) do not dwell on one issue: they take a theme and attempt to weave various stories through it.  Following the success of our Lower School show, Into the Woods, however, the focus of this letter will be entirely on that wonderful enterprise, which saw around 70 children working together with their teachers and other staff and students to produce something marvellous.

The lyrics by Stephen Sondheim are as witty as you might expect and the music as original, and occasionally dissonant, as we would anticipate from the composer who brought the world so many unusual and well-loved songs.  With musicians drawn from staff and students, the girls managed the songs magnificently, and some of the performers were so mature in their accomplishments that it was easy for the audience to forget that we were watching young actors, dancers and singers who were aged from only 10 to 13 years old.

The set deserves a special mention, since it was alive, and alternately green and grey, with real trees, through which the chorus emerged or twinkled sinisterly.  The performance was punctuated with plenty of flashes and bangs to remind us that this was fantasy of the most magical kind, fired by the imagination of two terrified (or, occasionally, preternaturally composed) children.  Other special effects included a beanstalk that took shape before our very eyes, and through which Jack climbed, and a wolf whose entire bed and stomach contents were torn apart to allow the release of Red Riding Hood and her blood-thirsty grannie.

It was all very clever and often tongue in cheek, but the individual performances were acted and sung from the heart, to most impressive effect.  Every one of the performers was superb, and the ensemble pieces were amazing.  This was theatre at its best (regardless of the fact that we were seeing a production powered by children), and I congratulate the director, Mrs Gemma Heather-Hayes, the musical director, Mr Jonathan Raynor, all the musicians, cast, support staff and theatre crews on their exceptional achievement.

It should come as no surprise that all the performances are sold out!