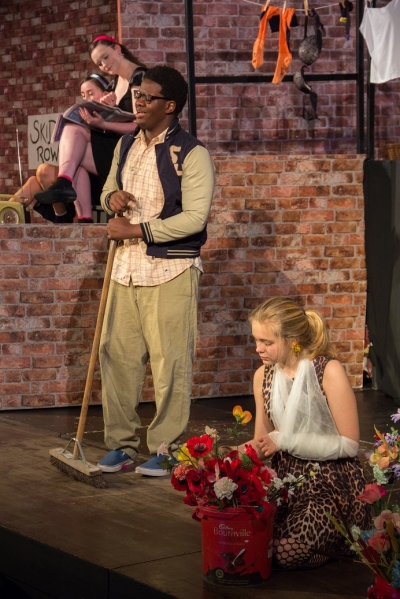 Under the direction of Peter Thomson, who took up his new role as director of music at St George’s in August 2015, the musical life of the school has continued to flourish.  Peter has introduced open evenings, when parents can look at the different sorts of musical instrument their daughters might try and for which we offer instruction (and it is difficult to think of an instrument we do not play here); lunchtime recitals are now a regular feature of Tuesday afternoons, when solo performances are celebrated in-house; performers’ platforms have entertained us regularly this term, with our very youngest musicians demonstrating their composure and a developing expertise in the newly refurbished auditorium of the Robertson Music Centre.

And every four years St George’s Upper School puts on a musical.  This year it was not from the glucose-rich traditional Broadway productions that the directors chose: “The Little Shop of Horrors” is a send-up of rock operas, with a macabre take on urban life and with its tongue firmly in its cheek throughout.  The cast brought the whole thing to life magnificently, supported by professional and student musicians, with the star of the show being the plant, Audrey II, voiced with sinister and sustained comedy.  The singing and acting were slick, professional and very effective.  I congratulate cast and crew on a very successful production.

This impressive standard of music and drama is not possible without our very talented and dedicated staff, who are so generous with their time and energy.  Their level of commitment is recognised throughout the school, but this week the teachers of music and drama deserve special recognition.  Let’s hope that they are not too exhausted to provide our carol concerts and services during this Advent season!  Well done, everyone.