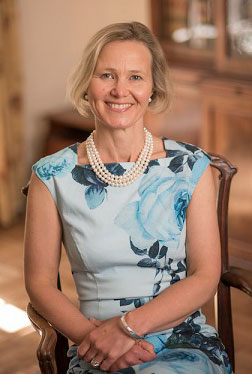 Last week there was much media attention given to a report published by a team of academics in America that seems to suggest that from the age of 6 girls start to regard themselves as less innately talented than boys. This is of course disheartening news, particularly as it appears to support the view that girls and women will tend to avoid professions which are perceived to demand genius or a high level of intellectual brilliance. One of the joys of a girls' school is the relative freedom from gender-related stereotypes. We cannot cocoon our girls from all external cultural influences, of course, but we can and do target our teaching to suit the way in which girls learn and develop. Positive role models are one key factor in inoculating girls against the influence of social stereotyping; from an early stage girls here will be in positions of responsibility and it will be their voices that are heard in the various student councils in school. They will go on to study subjects from every academic discipline, selecting the traditional ‘hard’ sciences and engineering-related courses just as frequently as the arts and humanities. Yes it is frustrating to read of the cultural influences that may affect children’s perceptions of themselves, but women of independent mind flourish still in this corner of Edinburgh…

Interestingly the same study also showed that just as many girls as boys recognized the importance of hard work.  A great deal of research has been undertaken into the behaviour and attributes that lead to success. We know for example that raw talent and physical aptitude alone are not enough to make a sporting champion or a virtuoso performer.  Many hours and years of dedicated practice are also necessary, as is the strength of character to overcome disappointment, injury or defeat. Of course a level of natural ability is also essential in order to reach the very top, but plenty who have that ability will lack the requisite dedication. I am delighted that when I read the personal reports written by the girls at St George’s, they refer to the hard work that they can see has led to improvements in one area or another. Similarly their teachers praise behaviours such as regular practice, careful checking, good listening and determination. Research carried out over many years by Carol Dweck and Martin Seligman in particular, highlights the importance of the growth mindset and positive psychology, both of which put the learner very much in control of their own progress. The Sixth Form and Upper 5 girls who have been taking mock examinations in the last few weeks will have been hearing from their teachers about the crucial next steps that will ensure that they acquit themselves as well as possible in the summer. This is the time when determination and grit really kick in; the girls can be sure of plenty of support from their teachers to make sure they have had every chance to understand the course material, but only the girls themselves can put in the time at their desks over the next few months. We wish them every success now as they dig deep and take control of their own learning.