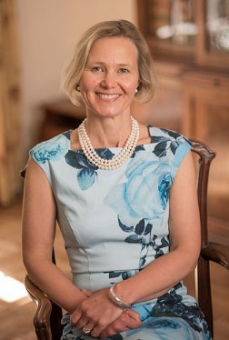 A Sense of Community and an All-round Education

I am often asked what makes St George's different and special. As I near the end of my first term here I can say with certainty that it is the combination of a strong sense of community and the value put on an all-round education that have most impressed me.

As I write we have just enjoyed a splendid choral concert at Murrayfield Parish Church in which some of the oldest and youngest girls in the school sung alongside one another in a rich programme of music, from the piercing beauty of Chilcott's Agnus Dei to the energy and joy of the Junior School Choir's rendition of Numbers Everywhere. With some extremely moving individual moments, the evening concluded with the combined choirs of the Junior, Lower and Upper Schools singing our own Anne Lewis's arrangement of Auld Lang Syne. The quality of all the performances was impressive but to see the sheer pleasure that the girls found in singing together was truly uplifting.  To bring the three sections of the school together for rehearsals this week has been no mean feat, but it was very special to hear them and I am sure that it has been a wonderful opportunity for them all to work together. Watching the focus and concentration of the Cantate singers, one was left in no doubt that they are just as close-knit and successful a team as any of those we watch on the hockey pitch or netball court. Thank you to all those who have been preparing over many weeks for the concert, many of whom will also have been working hard to meet key examination deadlines this week.

Over the course of the term we have celebrated so many achievements. It was so good to hear of the success of our Upper 5 and Sixth Form girls in the Model United Nations event at George Watson's College a few weeks ago. The confidence, ability to collaborate and capacity to think on their feet that this activity generates will never leave them. I dropped in to look at the work produced during the GCSE Art examination this week and was struck by the high levels of skill and individuality expressed in all that I saw. I know that preparations are underway for the Duke of Edinburgh Award expeditions at the moment and I was delighted to hear of the significant numbers of girls who go on to complete their Gold Awards while still at St George's which is a tribute to their commitment and organisation, and also to the support that they receive from the teachers along the way.

The Lower School girls I have met over morning break in the last few weeks have been bursting to tell me about the clubs that they love, but most of all about the joys of Camp, and they have shared memories of experiences going back to Primary 5 when they start with a two-day camp, building to the longer trips in Remove and Lower 4.  They speak with pride about overcoming fears and homesickness; clearly their abiding memories, which bind them together as year groups, are of pushing themselves, trying something new and above all of plenty of fun. With over forty clubs in the Lower School alone, ranging from Young Engineers to Hot Chefs and taking in a good dose of sport along the way, I am confident that there are opportunities for all at St George's.

Employers' organisations are clear that the qualities that they seek in the young people who enter the world of work are those of adaptability, willingness to collaborate, to think flexibly, to be creative. These are all attributes that will be nurtured through an all-round education, but perhaps most importantly, girls who take part in the full life of this school also have the opportunity to establish a sense of their own identity by testing themselves against their expectations; they learn to respect others' contributions, to see themselves as a vital part of a larger group, and thereby begin to develop the true confidence that will stay with them throughout their lives. I think it is also fair to say that they are enjoying a great deal of fun along the way.