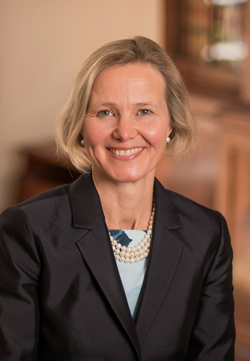 In this week that leads up to Remembrance Sunday we have marked the occasion at St George's with two very moving assemblies and acts of remembrance, one in Lower School and one in Upper School. Both were led by the History department, working with girls, who gave voice to the memories and experiences of a group of women who died before the end of the First World War, having either volunteered with the army medical services or worked in a munitions factory. One, Elsie Inglis, doctor and suffragist,  who died on 26th November 1917, will be honoured in a service at St Giles' Cathedral later this month for her work promoting medical care for women and in establishing the Scottish Women's Hospitals Committee which provided hospitals staffed entirely by women in France, Serbia and Russia. Neither of our acts of remembrance in any sense glorified war, but reminded us poignantly of the sacrifice of a generation, which lost not only its sons, husbands and fathers, but also wives, daughters and mothers to the war. The horrors of the two world wars undoubtedly brought about profound changes in our attitude to armed conflict. Some of us as parents and teachers will have had parents or grandparents for whom war had been a very real part of their lives. My own mother remembered the glowing sky over London during the Blitz and her mother had lost all her brothers in World War One. The sacrifice of those men and women can never truly be repaid, but by taking care to remember them by name and to seek out the facts of their lives beyond the starkness of the dates on a headstone, we might help to ensure that their legacy is a generation that values peace despite having never known war.

This week our Upper 6 girls, with the help of Ms Heather-Hayes and a cast drawn from across the Upper School, gave us A Woman's Legacy, a reflection on women's lives and experience presented through art, music and drama. By bringing to life figures as diverse as Iranian Nobel Peace laureate Shirin Ebadi, Eleanor Roosevelt, Rosalind Franklin, Rosa Parks and early Japanese feminist Raicho Hiratsuka, the girls reminded us not only of women's struggles, but also of their achievements. There is no escaping the fact that sexual harassment and discrimination are still a part of daily life, as the international phenomenon #MeToo has highlighted. It is right of course, that this is identified and challenged. Our task, as parents and as educators, responsible for the next generation of young women, is to give them the confidence to believe in their own intrinsic worth, and ensure that they see themselves as active agents in their own lives, not as potential victims. I am proud that the girls chose to address some challenging issues head on in their performances, showing a strong sense of their own values. Thinking of the literary characters whom we saw on our stage this week, our girls do not need to be Ophelia or Eurydice, the 'collateral damage' of struggles between men. Instead I hope they will share in and perpetuate the legacy of courageous women such as Elsie Inglis, whom we remembered in our assemblies this week.