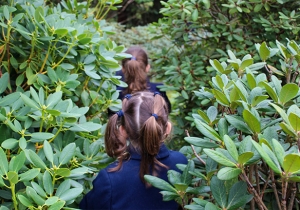 In the gardens, we met Mrs Pickup who used to teach at St George’s who took one of the four groups. The girls all set off in their groups on a walk through the Botanic Gardens and were told to look out for anything unusual! Soon one of the groups spotted a tiny suitcase on a bench. The girls rushed up to it and found a clue. Now the girls realised that they were on a treasure hunt!

Each group had the chance to find and solve a clue and share their findings with the other groups. During the hunt, the girls found a pair of tiny wellies, a miniature raincoat and hat and a teeny purple top with a sequined star on. The girls were excited as they came closer to finding to whom all these belonged! Great discussion took place about the various trees, shrubs, birds singing and a badgers’ sett that the girls came across during their walk. There were squeals of delight when the girls finally found a cuddly BEAR! They were delighted to find that this would be their class mascot.

On return to school, the girls had a lovely picnic lunch and they chose to call their new class mascot ‘Star’ after the shiny, tactile, sensory, shiny star on her t-shirt.

What a fabulous morning they all had! Star has now become a very welcome addition to the class! Everyone is now looking forward to taking her home for weekend adventures!