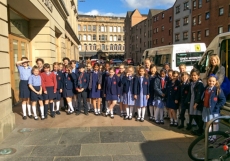 The sun was shining in Glasgow as the First Orchestra members in Primary 5, 6 and Remove and Primary 5 Theory Club girls accompanied by Mrs Morrison, Dr Cradock and Mr Raynor got out of the minibuses at the City Halls on the 1st of October for the BBC Scottish Symphony Orchestra’s Ten Pieces Concert.

The girls walked up the red carpeted steps and took their seats in the balcony.

The clarinettists quickly noticed that their teacher at St George’s, Miss Bell, was sitting in the orchestra getting ready to perform. She gave them a lovely wave and the girls waved back enthusiastically.

The concert began and it was very exciting to hear a full symphony orchestra performing ten trailblazing pieces.  The sections of the orchestra were invited to play separately for us to hear how they sounded.

Then the ten pieces began. One of the pieces was Florence Price’s Symphony No. 1. The girls learned that in 1933, Florence Price overcame prejudice to become the first black female composer to have her work performed by a major orchestra. She combined the traditions of classical music with the sound of spirituals, West African rhythms and dance from her own culture.

The concert was narrated by Naomi Wilkinson from CBBC and of course the St George’s girls managed to have a chat and a photo opportunity with her after the concert.