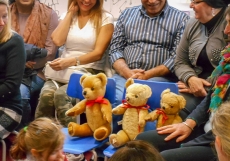 On Thursday, 26th September, we had a grandparents' and parents' tea party. First, our parents and grandparents showed us their favourite toys from when they were little. Then they let us play with them and showed us how they worked. There was a money eating robot which was quite funny. There was a tiny dictionary made of paper inside a little metal box and a magnifying glass so we could read the words.

There were lots of toy bears with their fur worn out because of all the love! We had a catapult made out of tights and a ball which looked really fun to play with. There was a mechanical maze and a ball bearing which everyone wanted to play with. We had monkeys that sucked their thumbs.

It was so interesting to see all these amazing set of old toys. At the end we had brownies and sandwiches. We also had tea, coffee, milk and juice. We were really happy to have our parents and grandparents in school with us and we had a great afternoon!