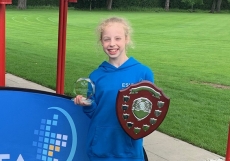 I love tennis and that’s why I play it but this experience at Champions Bowl in Croatia last month was like nothing I had ever experienced before. It all started when I won a competition in England and qualified for the Champions Bowl. At first, I thought it was just another tournament and then I realised that it was an international competition. I had to wake up at 7am to go to Venice and then drove from there to Croatia. I got to the hotel and everybody there had a tennis bag, racket and all of that.

That’s when I met Lisa. She was also representing Great Britain. At first, we didn’t know each other but then we became really good friends. We even bought bracelets to match. The first day of the tournament, I played a Romanian girl much taller than me. Sadly, I lost. But I still had another two matches and I won those. I ended up coming 3rd in my group which I was really proud of. I got a nice bronze medal.

Then, with the GB team, we went on a Ninja Warrior obstacle course on the water. For part of this, you had to sit on the edge of an air mattress and then two people would jump on it and fly you into the air! When I did it, I did a backflip by accident! Then everyone else wanted to try that too. The next day, Lisa and I went on a treetop adventure where we had to bungy jump, go on zip wires and climb. I loved it all and I hope I get to go back again one day, maybe to play in a real international when I’m older.