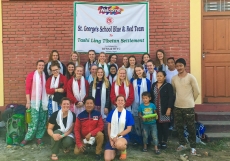 His fingernails curl over his fingertips; his teeth reduced to plaque; rags clothe him, barely. He waves excitedly and offers all he has for his ignorant guests: lines and lines of marigold flowers. He is around 7. A Tibetan refugee.

A typical evening: music sways and elegant, effortless dresses float to the steady beat. The scent of curry and freshly risen Tibetan bread diffuses freely around the place. But the place has 4 solid brick walls. Tibetan culture is confined within the parameters of basic refugee camps.

This has been happening since 1950 when China claimed Tibet. The communists not only claimed the land (which is estimated to occupy around a third of China), but they claimed their lives, culture, religion, beliefs and their right to education: their human rights. This conflict must be made a global priority: human rights are everyone’s responsibility.

During our Nepal expedition, we were so privileged as to share five nights with around five hundred of these wonderful people at Tashi Ling Tibetan Refugee Camp. We were able to speak to a man named Sonam, who had been at the refugee camp since its opening in 1964.

Sonam put the problem so clearly into perspective with his real-life stories that simply are not told enough. He was cautious of sharing too much information. The Nepali government did not want to anger the Chinese. A recent man’s birthday at Tashi Ling was spoken about by Sonam. The celebration was not permitted to leave the doors of the man’s home, as his safety was in jeopardy. Even when these refugees have escaped oppression, the oppression never leaves them.

The complexity and global nature of this issue makes identifying a solution very difficult. Illuminating the issue could have catastrophic consequences economically. For superpowers to intervene may mean they lose their greatest trading partner. But perhaps it is worth the trading compromise. To have a weaker economy for the freedom of thousands of people could mean human rights worldwide.