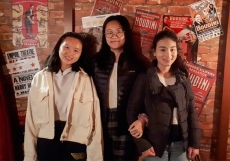 On Sunday 17 November, we went to take part in a Houdini's Workshop Escape Room. Our favourite bit was when we finally worked out each puzzle which felt very rewarding, especially because we worked together. One of the girls was excited when she accidentally worked out one puzzle which opened a secret door, though it actually ended up frightening the other girls a little bit when it popped out of the wall.

Each girl used different strengths to work out all the puzzles, some of which involved maths, spatial reasoning, and analysing details. One part which was a bit scary was when we had to unlock a hidden compartment which revealed a small locked door.

After we unlocked the door, it revealed a small crawlspace with chains hanging from the low ceiling. Crawling in and figuring out the puzzle was a bit spooky, but together we managed to figure it out. There was a great variety of puzzles that were all good brain teasers. If we ever got stuck with a puzzle, 'magical' hints would appear on a screen to prompt us, which was quite helpful at times.

Although we did not get out in the 60-minute time limit, only over by two minutes, we really enjoyed the whole experience and would love to go back again.