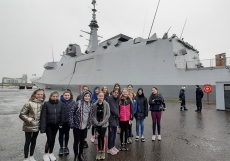 On the 24th of February, a group of Remove and Lower 4 girls from Young Engineers went on a trip to the FREMM Normandie, a French navy frigate ship. They are on a three-month tour and Edinburgh was one of their stops.

A frigate is a naval vessel; there are several different types of small and fast warships. We went on the school minibus to the cruise terminal in Leith. When we got to the ship, we got a tour round from one of the sailors who worked on the ship. On the tour, he told us the three most important places on a ship were the bridge, the engine room and the Combat Information Centre (CIC). 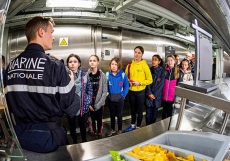 The CIC is where all the computers are, and on the screens are where they have the CCTV cameras, the radar (which tracks ships nearby) and they can also message people on the ship and sister ships. The engine room is the room where the propulsion is controlled. It's also the room where the capstan is, which pulls the rope in that is attached to the land so that the ship does not float away. 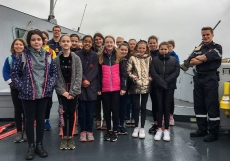 We had a tour of some of the other rooms, including the kitchen where they got their breakfast, lunch, and dinner most days, though sometimes they can leave the ship and explore the town or city they are in. There are 140 sailors to feed every day.  We also went to the room where the helicopter is when it is not outside. It gets out through a door that opens up and the helicopter is moved outside on to the helipad where it can fly from. The weapons that they have are guns surrounding the ship and lots of missiles. They have lots of fireman suits everywhere because they all have to be trained to be firemen.

The trip was really fun and everyone enjoyed it!