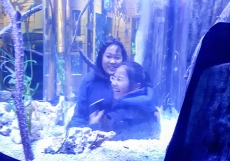 On the 1st of March, we went to Deep Sea World in North Queensferry. It was a fun outing, as we got to see lots of different aquatic animals. When we arrived, we were just in time to see the diver in the Underwater Safari feeding the fish and sharks. The tunnel is the longest moving walkway in Europe at 112 meters long. It was cool standing on the conveyer belt and seeing all the stingrays and sharks swim over us. 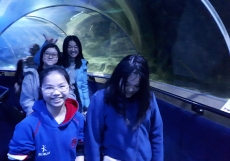 After that, we got to see the seals being fed. They did exercises to get the fish, like jumping out the water to hit a buoy, waving, and touching targets with their noses. Although it was quite cold outside, it was awesome seeing the seals jumping in the water, catching fish, and playing with each other.

The rest of the exhibits were also very cool. There were Clown Fish, Piranhas, and Poison Dart Frogs. We had a good look around all the exhibits before going to the café to stop for hot chocolate and slushies. 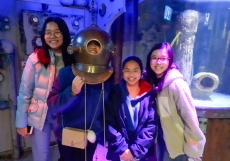 We then stopped in at the Creature Encounter where we got to see a Corn Snake called Sam. Although some of us were afraid to touch it, two of us did and were surprised as its scales felt rubbery and not hard as we expected. The talk was very informative, and we got to hear about the snake’s behaviour and diet. The staff told us about how the Corn Snake is often mistaken for the venomous Copperhead snake due to their similarity in colouring, however, they have a different shaped head. The Corn Snake’s head is thinner, whereas venomous snakes tend to have a more triangular-shaped head. 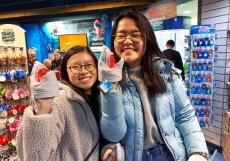 Before we left, we went to the Underwater Safari for a second time, where we got to see the sharks again. Then we nipped to the gift shop where we bought a couple of souvenirs.

Overall, it was a fantastically fun trip, and we got to see a lot of interesting animals.