Day 3: Poti, Georgia via Volgograd, Krasnodar, and Sochi in Russia

This epic journey, so far, keeps reaching cities at the end of a long travelling day. And we are discovering that cities are often located on a river – indeed a challenge I set anyone is to try to find major cities not located on a river, or a port!

Having left Moscow this morning, the first main city the teams reached after their first 1000km of travelling was Volgograd. This is located at the confluence between the Volga (the longest river in Europe of some 3,500 km length, important for irrigation, navigation, and hydro-electric power) and Don Rivers, in the south-eastern region of Russia. The surrounding landscape for most of this 1000km has been the beautiful rough wilderness of the southern Russian steppe (fairly infertile grassland plains without trees, apart from those near rivers and lakes, of little use other than for extensive pastoralism).

Some 750km later the more modern looking administrative town of Krasnodar was reached, located on the right bank of the Kuban River, just 120 km to the west of The Black Sea. All teams then managed the further 120km to the shores of the Black Sea, and the same distance along the shores to reach Sochi.

Most of you will have heard of Sochi as host of notable sporting events, including the 2014 Olympic Winter and Paralympic Games, as well as the Formula 1 Russian Grand Prix, and was also one of the host cities for the 2018 FIFA World Cup.

The teams are so determined to reach Bulawayo that they then managed a further 300km or so along the coast of the Black Sea, into Georgia. Georgia is located in the Caucasus (area situated between the Black Sea and the Caspian Sea) where Western Asia meets Eastern Europe. The country is bounded to the west by the Black Sea, to the north by Russia, to the south by Turkey and Armenia, and to the southeast by Azerbaijan. The teams have bedded down for the night in the main industrial port city of Poti.

The history of Poti spans 26 centuries, from some 8 century BC! Since 2008, land adjacent to the port has been designated a Free Industrial Zone - where there are financial incentives to attract industrial enterprise, including businesses of Iranian businesspeople trying to evade sanctions against Iran… Every nation needs to do all it can to build up its economy! 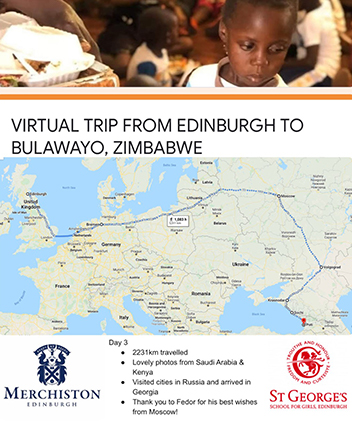