The teams were woken early from where they camped in the shade of the beautiful railway buildings in BoboDioulasso in Burkina-Faso, by the squeaking and rumbling of hand-drawn carts and heavily-laden bicycles being pushed past them, on the dirt tracks and potholed roads, heading for the market. – All such markets throughout Africa get in full swing way before first dawn, to ensure traders can purchase their fresh produce, prior to the heat of the African sun setting in, and get the produce on to their shops and stalls to sell to the public, catching the early commuters. Due to a lack of electricity throughout much of many of these African cities and countries, the population are up and about their day with the sunrise – only those with reliable electricity and lives to match do otherwise – which is a minority. The closer to the equator you get, the closer the sunrise and sunset is to 6am and 6pm respectively, so our teams would have been being woken by the market getting busy from very early.

Every nation has a stable food (one that is eaten routinely and is a dominant portion of a standard diet in a given population) – our in the UK is potatoes – although with globalisation many families in the UK may nowadays eat as much rice or pasta as they do potatoes (A-Level Geographers amongst us will know this is known as cultural diffusion).

I'm reminded of a graduate student I was asked to collect at Toronto airport when I was undertaking my Master’s degree there. I was given an allowance to collect him, take him out for lunch, get him to his lodgings, and do his first grocery shop with him. Lunch in the airport café was easiest. As we queued making as much polite conversation as a thick French accent of a ‘never left Burkina Faso before person’ would allow (i.e. not much), I was helping myself to a range of salad, and amongst the first statement he made to me was ‘You eat leaves??’. I hadn’t thought of salad that way before – but he was right – I was helping myself to a range of spinach, cos, gem, rocket….. He showed great concern (and didn’t think much of sandwiches either!). To cut a long story short... it wasn’t until I managed to take him to the Portuguese street market close to his lodgings that I got the first very board grin from him (which remained for the rest of his stay) – he had found plantain– a large green banana – very different to the sweet yellow bananas we import and eat here in the UK. Plantain is a dominant staple of many countries the teams have travelled through today - Burkina-Faso, Sierra Leone, Liberia, Cote d’Ivoire.

On travelling through these west African countries the teams would have learnt a lot about these plantains. They are larger and tougher, starchy and not very sweet. They need cooking and are not enjoyable raw. In every café, restaurant, and food stall the teams would have passed they would have found menus offering snacks and meals including smashed plantain sandwich, mashed plantains with meat or fish and gravy, plantain stew of many varieties, plantain porridge, plantain bread, plantain cake, fried plantain chips and crisps, etc, etc. All Africans are always very enterprising with every part of the produce they like to eat, so our teams also would have passed stalls selling all sorts of products made from the plantain leaves as well – such as plantain balm, plantain lip repair, plantain lotion bars, plantain bath salts, plantain lotion, herbal plantain bath bags, plantain infused vinegar, plantain poultice & plantain tincture, etc., etc. – A typical example of ‘waste not want not’ that the Africans are so excellent at.

Something else all these west African nations that the teams travelled through today have in common is very high rainfall, and, as a result, large rivers. The thick extensive forests, and few clear transport routes, make populations in many areas very sparse. This does provide some environmental advantages. In Cote d’Ivoire, for example, the last country reached today, the country is recorded to have over 1,200 animal species including 223 mammals, 702 birds, 125 reptiles, 38 amphibians, and 111 species of fish, alongside 4,700 plant species. It is the most biodiverse country in West Africa, with the majority of its wildlife living in the nation's rugged, almost inaccessible, interior. Sadly also, conflict and child soldiers, is another common feature.

Well fuelled on every type of Plantain, the teams finally reached Arrah, a town in east-central Cote d’Ivoire. Temperatures will remain in the high 30s (oC) all night, with high humidity (easily 70%), and the proximity to the equator means extensive convectional thunderstorms are common. Let’s hope they have found some good shelter for tonight. 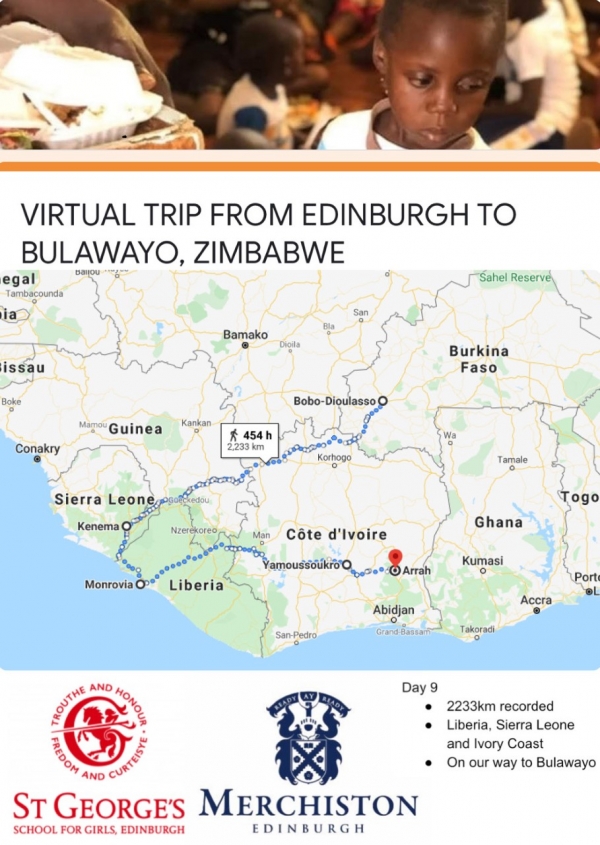