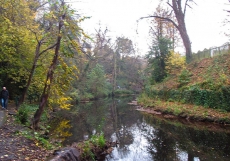 The sky was grey and the air was damp, but there was laughter coming from the 9 girls who decided to brave the elements in search of cinnamon buns and chocolate balls at the Meadows.

The expedition set off at 2 pm despite the drizzle amidst giggling and excitement to be set loose on the city with Miss King. Initially passing through the Modern Art Gallery, we tackled the leafy and muddy steps down the Water of Leith despite the white trainers adorning the feet of over half of our troupe. These were soon forgotten as Dean Village loomed on our horizon. At last: tarmac! And on to our next goal of the Grassmarket where we stopped for a breather as the rain held off for a few minutes. 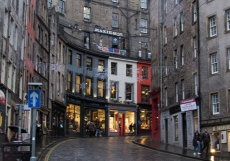 Then onwards evermore, up through the university and into the Meadows, our ultimate destination. Cinnamon buns and chocolate balls were swiftly ordered by Miss King to sustain the adventurers for the homeward journey. Back we traipsed to Houldsworth for hot showers and equally hot chocolate: cold and wet but not defeated!