About Us » Academic Departments » Modern Languages

Language learning at St George’s focuses on developing communicative capacity while introducing students to cultural aspects behind each language.

In St George’s Nursery and in the early years of Primary, language content is delivered by the class teacher along with regular sessions with a Languages specialist, as well as optional clubs in Chinese (Mandarin), French, German and Spanish. The initial emphasis is on cultivating an awareness of many different languages and cultures. As pupils progress into P5 French or Spanish becomes the main language taught. This alternates on an annual basis. In P5, all classes have three sessions per week in the main language delivered by a specialist teacher.

Building on their language learning in Junior School, girls in P6 and Remove (P7) continue with three periods per week of the language studied in P5. In Remove, students also experience a four-part “Language Carousel” for one period a week. This introduces them to German, Chinese, Latin and either French or Spanish, depending on the main language being studied that year. This process helps students to make their choices for languages in Lower 4.

In Lower 4, girls study two languages from French, German, Spanish, Chinese and Latin. Those who are particularly able linguistically have the option to study two languages within the timetable, together with Latin as an extra subject, on a reduced timetable at lunchtimes and at the end of the school day.

Catch up classes are available in for students joining us from other schools who may feel that their proficiency in any particular language requires a little support.

The Globetrotters Club, run by members of the 6th Form, is another forum for students to develop their interest in languages out with the classroom.

Following on from their language studies in Lower School, the girls are well-informed to make a sensible decision about which two languages to study in Upper 4 (S2) from Chinese (Mandarin), French, German and Spanish (and Latin), before choosing to continue with at least one language other than English in fifth form. Some students elect to study three languages in Upper Four. All four modern languages are offered at Higher and Advanced Higher level, where results are consistently very good indeed.

Native speakers of non-taught languages are encouraged to take an examination in their mother tongue.

The Faculty of Modern Languages provides many opportunities for the girls to travel abroad – there are annual trips to Normandy or Spain for Remove, an exchange to Germany for GCSE classes.  As well as the possibility of organising work experience for Sixth Formers, cinema and theatre trips and the Language Leader club are also offered.

The faculty is supported by language assistants in Chinese, French, German and Spanish.

All our teachers are registered with the GTCS (General Teaching Council for Scotland) and they all hold a post graduate teaching qualification (usually PGCE or PGDE) if their degree is not in education. 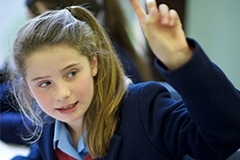 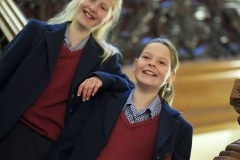