St George's High School for Girls was founded in 1888 by a group of Victorian women, led by Dame Sarah Mair, who wanted to give women the education they had been denied. They were leading campaigners for the admission of women to Scottish universities and a full curriculum for girls of school age. Together they helped to change Scottish education.

The founders were inspired by the ideas of the German philosopher, Friedrich Froebel. They were determined to create a school where girls developed all their talents and worked to the best of their ability, but did not have to compete against one another or feel any sense of failure.

In 1876 they set up 'St George's Hall Classes' to provide teaching up to university level, either by attendance in Edinburgh or by correspondence courses.

Ten years later in 1886, they started the first training college in Scotland for women teachers in secondary schools. This was followed in 1888 with the creation of St George's School for Girls which put the finishing touches to their system.

The early days in Melville Street

The school began in October 1888 in a converted house in Melville Street  in the centre of Edinburgh, with Miss Walker  as the first Headmistress. It had only fifty pupils. 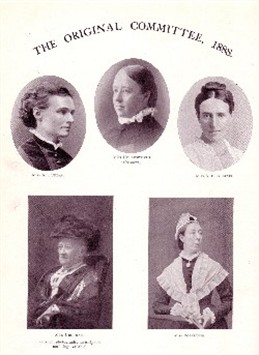 Members of the Original St George’s Committee in 1888.

By 1914 the school had grown and needed space for over three hundred girls so it moved to a new, purpose built school on its present site in Ravelston and Murrayfield.

For a time during the Second World War, St George’s was forced to relocate to the Borders for the safety of its staff and students. Many girls remained at home with their families, but there were a number of boarders and staff who moved to Hallrule House in Bonchester Bridge between 1939 and 1942. In 1942 they returned to Edinburgh, where the school building had been occupied by the army. When the school finally reopened in October of 1944, restoration work was undertaken to bring it back into working order.

In the 1976, the neighbouring girls’ school, Lansdowne House, merged with St George’s. For a time, the old building was used for boarders and classes, but it now serves as the main building for the lower school girls. Both the upper school and lower school buildings retain their own character and history.

Find out about St George's Archives

Find out abut St Margaret's School. St Margaret's was founded in 1890 by James Buchanan and flourished as a school offering education for girls until it closed on June 10th, 2010. Many girls came to St George’s from St Margaret’s to complete their schooling, but they retained their devotion for their old school. 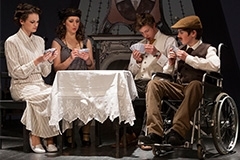