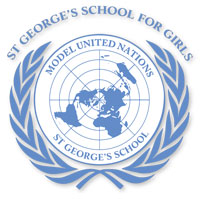 Model United Nations club is a popular club in Upper School at St George’s. Since Autumn 2006, the students have adopted the role of being representatives of UN member states in various Committees, debating current international issues and conflicts from their country's viewpoint. The club is entirely student-led. Upper Sixth students decide on the topic for debate, write debate resolutions and chair the debate itself every Friday at 12.45.

Our students have benefited from participating in conferences across Scotland and the UK. Not only do these conferences allow the students to compete against other schools in a formalised setting, but they develop their networking and communication skills considerably. We have won many individual and school-wide awards in these conferences as a result of the students’ preparation, confidence and independence.