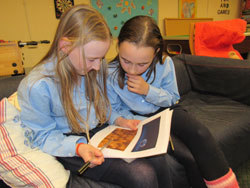 On Friday night we had a quiz in Houldsworth. I was feeling quite confident as I knew there would be questions on Houldsworth House within the quiz, but I was surprised by the mixture of subjects, in particular the creative round. Each team was given a limited number of random resources such as tin foil, a tennis ball, colourful feathers, blu-tac and a pen and tasked with creating whatever they wanted within 5 minutes. We designed a tin foil captain’s hat adorned with feathers while other teams created a campfire scene, a dog toy and an ‘interpretive structure’.

My favourite round was the final tie-breaker round however, where we played two rounds of ‘Stop the Bus’ which was very intense and competitive with lots of shouting.

The hardest round was definitely the ‘close-up' round. We had to look at 10 pictures of everyday objects that had been magnified and identify what they were.

After the quiz I realised how much more there is to know about Houldsworth. I learned that there are 68 rooms in the House and Bungalow! All the boarders who participated fully engaged in the quiz and I really liked the atmosphere. It was much more intense than I thought it was going to be, the younger girls were so excited, and it was a lovely bonding time with everyone.