Last week P6 were meant to be going on an activity camp at Lendrick Muir but unfortunately because of the recent lockdown were unable to do this. So, the teachers brought camp to us at home...

The first activity we had to do was building our own dens to sleep in that night if we wanted. Some people made dens out of ironing boards, laundry racks, sofas, anything really that we could find at home. Some people even slept outside in tents. We had a lot of fun!

After break, we met back at camp base to discover our next activity, a scavenger hunt. We got put into small groups with a group leader for each. In the groups we had to try and find 40 items around our house in half an hour. The group that found the most items and handed in the assignment (with the items on it) first was the winner. 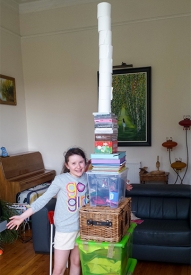 Our activity after lunch was a round-robin of three different tasks. We got put into groups with different people than before and went to the activities together as a team. One of the round robins was with Miss Sinclair and it was called “At the river”. We had to make a paddle boat out of materials we could find around the house and measure how far they travelled in our baths or sinks. Another one was with Miss Hippisley called “In the woods”. We had to make a tower out of things we could find at home and measure them. We put all the measurements together in our groups and the group with the combined tallest tower won. Some even reached the ceiling. If we had time after we had finished our tower we had to make knots out of rope. The other activity was with Mrs May, it was called “At the meadows”. We had to do as many keepy uppies as we could with different items (hockey stick, tennis racket, football, etc). We combined our scores with our team and the team with the most keepy uppies won.

In the evening we had some optional activities that we could do. The teachers gave us a link to the film WALL-E to watch at home with our families, if we wanted to. We all really enjoyed the first day at camp 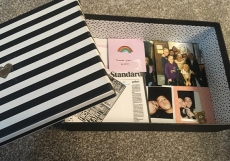 On the second day, we met back at camp base to hear what our first activity was. Some people were very tired after an action-packed day the day before and some of us having had not so good a sleep in our dens!

The first activity of the day was to make a time capsule about lockdown. We put in photos, memories, local papers, diaries, drawings of rainbows, some people even put in rubber gloves, toilet rolls and hand gel! Then we put them somewhere safe, somewhere that we wouldn’t look at for a while, and then in later years we might find them and look back on our memories.

The next task was to ”save” people from sinking ships. But the catch was that there were thirteen people on the boat and only room for eight on the lifeboats. We were given information about each person and had to decide who we would have wanted to save. Then we met in our groups and had to debate for who we wanted.

The last thing we did at camp was the talent show. We watched all of the pre-recorded videos. Some people did baking, dancing, showed artwork, and some people played their instruments. At the end of the talent show we had the camp awards. This was where we found out who had won each activity.

We had such an amazing time at online P6 camp! We would like to thank all the teachers for all the hard work they did to make this possible!