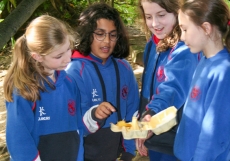 We have been learning about the Human Body this term. Last week, we studied the skeletal system and to round it off, our task on Friday afternoon was to make a helmet for an egg. The helmet needed to be able to protect the egg when it was dropped from a height.

We watched an episode of Operation Ouch where a boy was not wearing a helmet and was cycling down a hill at full speed when he realised that his breaks did not work! He crashed into a car and had to be taken to hospital. The doctors were incredibly surprised that he had no serious injuries, even though the car was smashed! He was a very lucky boy (and will be wearing a helmet on his bike from now on!)

We were put into teams and given some materials to use to make the egg’s helmet. We drew a face on the egg and had to keep this free of the helmet so that it could ‘see’.

Making the helmet was really fun and trying out which materials we should use took up most of the time. The Styrofoam was easy to crack and stick together and the string was useful for tying things. The newspaper worked well for us as an underlayer, and the bubble wrap was good for the top layer.

We went outside to drop our eggs from the railing outside the P6 door. It was very nerve-wracking as we waited in suspense to see if our eggs would make it to the second round. Most of the teams’ eggs had a little crack and it was the teacher's job to judge whose egg got through to Round 2.

Despite our best efforts to protect our egg ‘skulls’, there was only one egg that survived! It went through to the second round, with one other egg that only had a tiny crack in it. We didn’t know what Round 2 would be but then Mrs Sinclair pulled out a three-man catapult! The first time the winner made it without breaking and we were all cheering but the other egg cracked. The second time, the teachers helped launch the catapult and the egg went even further. But it still survived! Everyone was so excited and was screaming and shouting. However, on the third launch, it did not make it - it finally cracked open. It was a really fun activity and it was great to be able to interact with all the P6 classes again. We can't wait to see what the teachers have planned for next Friday!