St George’s School, Edinburgh, is delighted to announce the appointment of Mrs Carol Chandler-Thompson as its next Head. St George’s remains one of Scotland’s largest all through girls’ schools and the only all-through girls’ school in Edinburgh. Carol will take over the headship from August 2022, immediately following Alex Hems who is moving to lead the Aldenham Foundation in Hertfordshire after five and a half very successful years at St George’s. 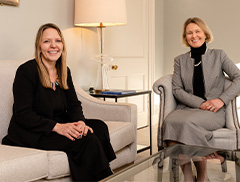 Carol Chandler-Thompson is currently Head of Blackheath High School, London where she has led an extremely successful independent girls’ school since 2014. Blackheath High School is part of the Girls’ Day Schools Trust with an impressive record of academic success and an ethos very similar to that of St George’s. The School has grown by 13% to 760 pupils in the past seven years under Carol’s leadership.

Carol has 25 years experience working in leading independent schools. Prior to becoming Head of Blackheath High School she was Head of the North London Collegiate Girls’ School in Jeju, South Korea and was previously head of history and politics at North London Collegiate School in London between 2004 and 2011. Carol started her career as a teacher of history at Haberdashers’ Aske’s School for Girls, Elstree in 1997.

We asked Carol to tell us about what attracted her to St George’s. Here’s what she said…

“I feel incredibly privileged to be appointed to lead St George’s in the next exciting phase of its proud, pioneering history. It is a school I have long admired; both for its well-deserved academic reputation and also the breadth and diversity of the co-curricular on offer. The warm and vibrant welcome I have already received from Council, staff and students is testament to the distinctive St George’s spirit that makes the school so special.

My family and I already have strong family roots in Scotland and have spent many a school holiday exploring the Highlands and Islands. We are very much looking forward to making Edinburgh our home and meeting everyone who is part of the school family in due course.”