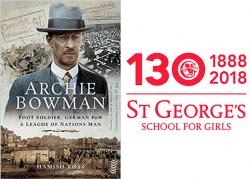 On Friday 7 September, Mrs Latimer spoke to the Sixth From about her great-grandfather, Archibald Allan Bowman. He studied philosophy and classics at the University of Glasgow, graduating with first class honours and a second class degree respectively. He then travelled with his wife to Princeton University, in America where he became the Chair of Logic. However, he was called on to serve his country as an officer in World War II.

Throughout his years of service, for some of which he was in a Prisoner of War Camp, he wrote hundreds of letters home. These were addressed to his wife and three children, with important messages some of which were religious, about his feelings, and others were advice for his children if he did not make it home. This advice was to never sell yourself short, achieve the upmost of your abilities and not accept anything but the best, all of which is still relevant for us, 100 years on. The presentation also highlighted to us the importance of education and how we should not take it for granted, as it was Bowman’s writing of both letters and sonnets which carried him through the War.

The Man from Northumbia University

Upper 6 Receive a Talk from Members of Alcoholics Anonymous

Walking to Everest Base Camp

Sixth Form Conference for U5