Halloween has past but masked images still haunt the imagination….

Beneath the dark overhang of night, a hunched figure lurks. A sharpened blade glints at their hand, a sliver of moonlight revealing a blood-curdling mask. A clown. But this is reality…not a scene from the latest horror flick. 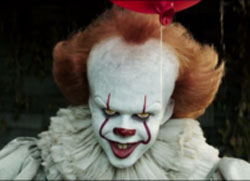 The killer clown craze which swept across the globe last autumn, involving people dressing up in clown outfits, carrying knives and stalking around terrorizing the public, has been linked to the works of Stephen King. The crude crimes spiked, following the announcement of a film remake of the novel ‘It’ by Stephen King, currently on release. The book is considered a classic horror and features the infamous mass-killer clown, ‘Pennywise’. The novel is known to have a mass cult following and is therefore rumoured to have stimulated the eruption of killer clown sightings and crimes, especially due to the proximity of Halloween. Police warned that the craze had been growing out of control, with sightings and reports increasing. Stephen King himself even tweeted regarding the craze, “Hey, guys, time to cool the clown hysteria--most of ‘em are good, cheer up the kiddies, make people laugh.”

However, there is long-standing public anxiety concerning the media’s capability to generate violent and aggressive behaviour among young people through violent content shown on screen or in video games. The recent spate of crimes inspired by the mass media such as killer clowns, deadly purges and demonized dolls, has only furthered debates linking violence to the mass media.

Sociologists identified these acts of violence as symptoms of the 'hypodermic syringe theory'. The approach suggests that there is a strong link between exposure to the mass media and real-life violence. The idea behind this theory is that the audience receives daily ‘injections’ of messages from the TV and newspapers. The medium is the syringe, the media content the drug and the audience the patient. The model views the audience as passive consumers but it does not take into account the variation in ways in which people react and utilize the media. The media works like a drug, suggesting that the media has a direct and powerful impact on the viewer’s behaviour.

The majority of early research referring to the links between media exposure and violence were conducted in laboratories using experiments. Albert Bandura, a researcher investigating the link between exposure to the media and real-life violence, carried out his research with children from a nursery in 1963. Bandura placed the children into four groups, showing them a short film featuring an adult seeming to hit an inflated plastic doll. Badura discovered that when placed in a room with several different toys, most of the children who had watched the film mimicked the behaviour displayed in it.

These results fuelled debates within society regarding the influence of the media with reference to violence. Many argued that copycat killers were becoming increasingly and alarmingly popular, especially among young children. So can we really say that the media is at fault for these fatalities? Can the media be blamed for these violent outbursts? I suppose it can be argued that there are some links between the media and violence as shown with the Killer Clown incidents. However, research has proven that this is not the norm; if we really want to deal with crime, it is the causes of crime which need to be addressed, not the influence of the media. So, instead we need to remember that it is our own choices that define our actions, not our influences.