On the 10 September, the Royal Navy came to visit St George's!  On Monday the Lower 4s and Removes went to the Upper School hall to learn about a mixture of science, engineering and maths.

The first experiment was ‘The super shoot of doom!’ They first showed us a video of how a man was going down a water slide, intending on landing in a paddling pool. Yet instead he flew right over and landed on his backside!  This was because the man had not done the correct maths to calculate where he would land. They got a real mathematician to correct why he had not landed into the pool. After that they then showed us a video where this person was ages away from the paddling pool, yet this time he landed right into the pool! Once again that was because he had figured out the exact measurements of where he should land and how. After that, they brought out a tube, a ladder, a pure metal ball and picked four volunteers to hold buckets over their heads. The ladder was to hold up the large tube in which they would send the ball through to make it go the distance.  The volunteers held buckets on top of their heads and were named Bucket 1, 2, 3 and 4, 1 being the closest to the tube and 4 being the furthest away. They were there for the ball to land in the buckets. So, they sent the ball through the tube and everybody waited with much anticipation as the ball went through the tube, but just as the ball began to fly out of the tube the man caught it - to avoid any injuries of course! 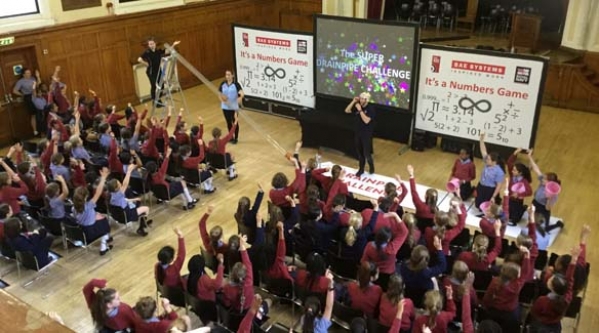 The next experiment was a maths card trick. It was truly mind boggling! There were 21 cards in the pack and the person who had to find the volunteer’s card turned away while the volunteer picked a card. The selected card was then shuffled into the pack. The pack was laid into three separate piles and the volunteer was asked to reveal the pile in which the selected card was in. Once the pile was identified, it was put in the centre of the other two piles. They then repeated this process 3 times until the card was directly in the middle! So, they ended up finding the correct card.

The third experiment was about keeping a plane and helicopter-carrying-boat balanced. Once again, they got a volunteer to do the maths to calculate how to load the boat to ensure it would be balanced in order that it could safely sail and transport its cargo to its destination. They calculated the weight of all the cargo that was going to be loaded onto the ship to ensure that the weight was within the limit of the boat’s carrying capacity and to ensure it would not tilt or sink. They also had to work out the location to load and store the cargo to ensure that the boat would stay balanced and would not lean or fall over.

We were shown a high-tech robot which carried 7 different computers inside it! It showed various different abilities such as singing, dancing, responding to questions and getting up by itself. A lot of this was because of the codes and commands planted into its system. It could even feel things on its own head as it had sensors to feel objects near or on its head.

Their main message from this presentation was that you can do engineering if you want to and no matter what gender you are. It should be about the skill you have in the career, not what gender you are. It also showed us how maths comes into a lot of forms, from a simple card trick to a high-tech robot! It shows us how the world around us is moving on and we must be ready for it. 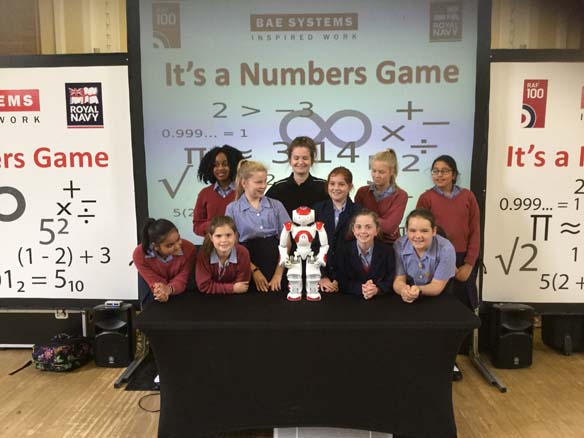