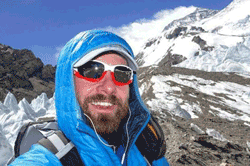 On Wednesday 10 October I listened to a talk presented by Ricky Munday, who has succeeded in climbing to the top of Mount Everest. The first part of his talk was about his life and career in 7 countries and 4 continents, which was cool. Then he talked about his first attempt to climb Mount Everest. It was so dangerous that one of his friends lost 4 of his fingers due to the extremely cold temperatures there and almost died. However, he decided to pursue his dream, so he tried to climb the mountain again this year, and he made it. He showed us a video which was about the amazing view at the top. It was really inspiring to watch that video. I feel so lucky to be able to have met him and listened to his story.