We started planning for the Halloween party in the middle of September. The Upper 6 boarders discussed all the different themes we could have and immediately thought of Willy Wonka! It seemed unusual and different from the usual spooky themes, and the decorations would be fun for it too. Many people re-watched the film to get inspiration for decorations. We strung balloons decorated with sweets along the Big Comm and encouraged everyone to dress up in their best Wonka inspired costumes.

We decided to have a treasure hunt with clues that would lead the different teams to the next clue. Each clue had a different challenge that needed to be completed. There was apple dunking, eating doughnuts from a string and a blind chocolate taste test. My favourite game was Pictionary Chinese whispers. No one managed to get their clue right even though they were all Chocolate Factory themed!

We also had a costume competition. Our winner was Lexie, who was dressed as our chef Stuart! It was so funny and creative. She won a golden ticket jar filled up with sweets awarded by our own Willy Wonka, Mrs Bryce. Organising the Halloween Party was tiring but very rewarding, all the hard work was worth it!

I dressed up as a French pumpkin for the Halloween party. Other people had dressed up as the golden ticket, a cat, an 80s rockstar, a sumo wrestler, two oompa loompas and Willy Wonka. My favourite activities were bobbing for apples and the blind chocolate tasting. It was much harder to guess the chocolate than I thought it would be. I really enjoyed the treasure hunt. The best clue was the attic. We had to figure out the code and it was very difficult, then we got to eat doughnuts from a string. There were sweets hidden all over the boarding house, and we enjoyed picking them up as we went! I had a really good time at the party and especially loved popping all the balloons at the end. 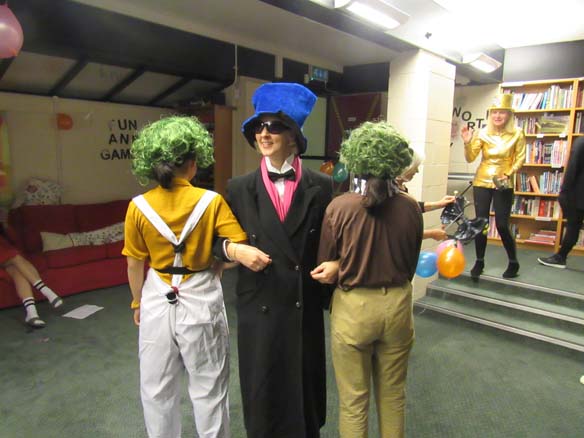