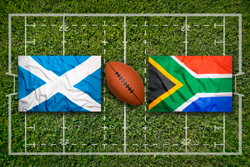 We had our faces painted at Houldsworth and set-out to the match in high spirits. Everyone on the street was so excited and dressed very patriotically. We saw a few people supporting South Africa but the majority were supporting Scotland. It was so hectic getting into the arena itself because it was very crowded, but once we got in we were greeted with the sights and sounds of a packed stadium and the adrenaline started running through me. We got some food and found our seats, then all the lights went out and fireworks exploded above us while music played and we sang along, the lights glittered all around us. It was an overwhelming feeling.

When the game started you could feel the tension build. The first try was won by South Africa, which only had the Scottish crowd encouraging their team more. At half time a couple of my friends and I went out of the stadium to get some fresh air and stretch our legs. The second half of the game was a little less intense as everyone was impatiently waiting for a victory. Unfortunately, this time Scotland lost to South Africa, but it was such a close match!

Afterwards all the Scottish supporters seemed forlorn and started to trickle out of the stadium, while the South African fans were enthusiastic to the end and their pride for their team was evident in their chants and songs.

I really enjoyed the rugby match and am so excited to go to next week’s Scotland vs Argentina match. I hope the atmosphere is as memorable and Scotland will gain their victory!