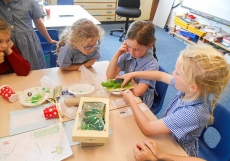 The Primary 3 have been looking at some of the Roald Dahl books for their topic this term. Inspired by The Enormous Crocodile, the Primary 3 girls set about designing and making traps.

The girls in P3X designed and made traps to catch a crocodile. These traps ranged in design from traps with doors to traps that fall from a height and were all well camouflaged. Meanwhile, P3Y made crocodile traps for children (just like the Enormous Crocodile did). They made traps where the crocodile camouflaged himself so that he could not be seen. In one of the traps, the crocodile was disguised as a tree, in another, as a wooden walking beam and in the final trap he was disguised as a swinging tree.