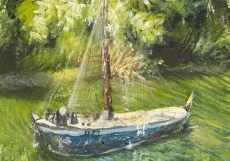 Congratulations to all the girls who submitted entries to this year's OGA Sixth Form Research Award.

Isobel - A Letter to Poseidon

Flora - Are we Alone in the Universe?
Sophie - Summer in a Sketchbook
Tilly - Boxing Day

Students in Upper 5 and Lower 6 were invited to enter a piece of independent work undertaken over the summer to be assessed for the Old Girls Association Sixth Form Research Award.

Work submitted could be in the form of an essay, an investigation or a creative project.

Entries had to be original and undertaken independently. Submissions had to include a bibliography and a short account of the aims in undertaking the chosen project and an evaluation of the outcome.

The candidate judged to have submitted the most successful piece of work received the Old Girls Association Sixth Form Research Award of £250.  Three Commendations were also awarded.

Over 20 entries were received for this year's Award.