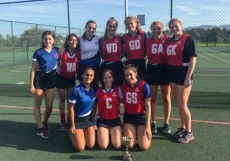 Well done to the Senior Netball team who won the ESMS Netball Festival at Mary Erskine School.  The girls played extremely well and defeated Kilgraston 14-12 in the final.

The Senior Team have also played their first fixture in the Scottish Cup, winning at home against Craigmount High School.  Well done!