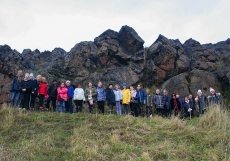 On Tuesday 29th October, P6 went to Dynamic Earth and on a Geo Walk. We wanted to learn more about the Earth and rocks, which links in with our current topic.

First, our group went to a workshop about natural hazards and disasters. Our guide showed us a video about earthquakes, volcanoes, tsunamis, tornadoes, and meteorites – all very dangerous! Then we had five minutes to do the activities at each station. In one, we had to play a game to protect our village from a tsunami by growing trees and upgrading buildings. We also looked at different rocks that came out of a volcano – it was amazing to see how different they were, like obsidian and pumice. At the meteorite station, we had to guess which rocks came from outer space by testing their magnetism. Then we made mini tornadoes using water and plastic bottles and we built a model building that had to survive the earthquake machine.

After the workshop, we went on a tour of Dynamic Earth. We time-travelled all the way from the ‘Big Bang’ in the very beginning, to our world today. The volcano room was really fun because the ground shook and we all screamed! In the ice age room, the picture zoomed over the glaciers, making us feel like we were soaring over and around them. In the self-toured section, we liked the model heads that lit up with information when we put our hands on them. There was also a screen that told us how many people there are on Earth, which is a lot - and the numbers keep increasing!

We moved on to a corridor that looked like the inside of a submarine. There was a vampire squid in one of the TV windows. Everyone liked the big block of ice in the arctic room. Some people tried to keep their hands on it for as long as possible (and then touch other people’s necks!)

In the next room, we went on a ‘plane’ and ‘flew’ through different biomes of the world. There were lots of different climates, like rainforests and deserts. We learned about different plants and animals that have adapted to their environment. At one point we were showered by fake snow! Halfway through the journey, the plane ‘crashed’ – it was really fun! When we arrived safely in the Amazon, we learned about some of the animals there, like how never to smile at a monkey and how to tell the difference between a crocodile and an alligator.

After a quick lunch, we went to the Show Dome for a film on super volcanoes. The movie told us about a super volcano called Toba and that Yellowstone Park in America is one huge super volcano that could erupt at any minute!

We then went outside and met Angus Miller, who took us on a Geowalk. We were lucky to do this in the afternoon because the morning group got very wet! Angus is a geologist from Edinburgh University, and he told us all about the rocks of Arthur’s Seat and Salisbury Crags. He talked about how igneous rocks are so hard and strong, coming from volcanoes, and how sandstone is a sedimentary rock and can crumble very easily. He also talked about how metamorphic rock is formed under huge pressure. We saw examples of all these types of rock on the hill. We also met ‘Bob the Boulder’ which is a big rock that was carried along by the glaciers in the ice age and left in the middle of Arthur’s Seat, and we hiked up to St Anthony’s chapel which is now in ruins but is hundreds of years old. St Anthony is the patron saint of skin diseases and people would wash in the streams on the hill to try and get cured.

When we got back to Dynamic Earth, we met up with the other group and were able to chat about our experiences. We really enjoyed this trip!