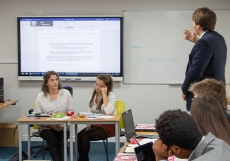 On the 5th and 6th of October, over 200 students from across Scotland and England attended the first-ever Model UN conference at St George’s. The students debated vigorously on such important international issues as the situation in Syria, maternal mental health and single-use plastics. All students were placed into six different committees, which were skilfully chaired by Upper Six and Lower Six students. The Committee Chairs had decided on the debate topics and wrote research briefs in order to prepare the students. They were able to blend an important academic ethos and a sense of fun during all the debates, which created a superb environment to discuss international relations.

The Conference benefited from the expertise of three visiting academics: Beatrice Heuser, Chair of International Relations from Glasgow University; Jill Stavert, Professor of Law at Napier University; and Dr. Oliver Turner, Lecturer in International Relations at Edinburgh University. These visiting speakers were able to develop the students’ understanding of important international areas of disagreement, including US-China relations and mental health and human rights law. 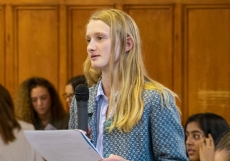 Over sixty students from St George’s were involved in the conference. From chairing the debates to acting as runners - passing messages between different country representatives – all students were able to participate in making the Conference such a wonderful experience. Nothing proved this more than the General Assembly on Sunday where all countries had to resolve a breaking crisis in the Persian Gulf. The level of debate, engagement with the topic, and the development of the relations between countries were remarkable.

The Club is now looking ahead to a Lower School Model UN conference, which is scheduled for June 2020.