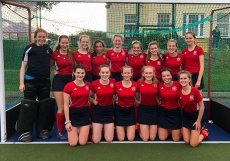 Well done to the 1st XI Hockey team who defeated North Berwick High School in the East District Cup.  The girls won 6-0 at North Berwick on Monday 4th November.  The girls will now play in the semi-final against Mary Erskine’s, Boroughmuir or Firrhill.  We also wish the girls good luck next Wednesday in their Scottish Cup fixture at Kelvinside Academy. 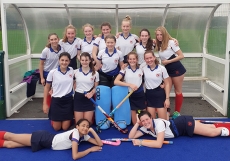 Well done to the Lower 5 ‘A’ Hockey team who also won in the East District Cup.  The girls defeated Boroughmuir 5-0 away from home, playing some great hockey.  St George’s have now reached the semi-final and will play either Trinity Academy or George Watson’s College.  We also wish the girls good luck in their home Scottish Cup tie next Thursday against Loretto School.

On Saturday 2nd November a Remove team competed at the MES Hockey Festival. The girls had an indoor session on Friday which allowed us to focus on our individual skills so it was good to apply them in a competitive environment. Our first game was against Strathallan; the team dominated possession and secured 2 goals. We then faced High School of Dundee, which was a tighter game and the girls did well to stifle their attack and create enough opportunities to score. Our third game and most impressive game was against Watson's. The girls showed real quality and put Watson's under pressure. The final score was 0-0. This meant the last game was a crucial one against Edinburgh Academy. The girls had limited opportunities in attack and unfortunately lost this game 1-0 after a well-taken goal by the opposition. This group was extremely tight and having lost to Edinburgh Academy meant we lost out on going through to the semi-finals on goal difference.