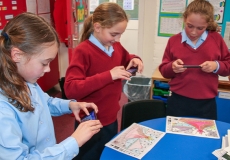 Primary 6 were introduced to an augmented reality app called Quiver Vision. First, we coloured in pictures of volcanoes, and then we scanned them into the app. Before our very eyes, our paper volcanoes were transformed into 3D versions on the screens!

Once our fiery mountains were in the app, we could play around with them. We were able to change the volcano colours, we made them explode, and the app also asked us about the different layers of a volcano, for example: asking us to click on the ‘chamber’. At this stage, the phone became a quizmaster... it was like being on television quiz show! Scanning proved a little tricky with some of the pictures, but all of us eventually managed to get the app to work in the way we hoped for.

I’ve never before seen a colouring-in sheet come to life, but that’s what we did. Amazing!