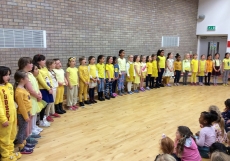 On Friday, we invited the Primary 3 parents and grandparents to watch our assembly on Roald Dahl.

The girls all dressed in yellow, as this was Roald Dahl’s favourite colour. The assembly was in four parts: first of all, the girls told us some facts about Roald Dahl; for example, Roald Dahl was a fighter pilot during WW2 and was shot down in the desert, but was not injured and that he used to write all of his stories in his shed at the back of his garden!

The next part was about The Enormous Crocodile, which was the first Roald Dahl novel that we read in class. Some girls told us the descriptions they had written about the crocodile, using lots of interesting adjectives and other wow words:

The Enormous Crocodile has triangular toes with sharp nails. Isabelle

The Enormous Crocodile has a dark, bumpy and slimy back. Bess

The next focus was on The BFG with the theme of dreams being explored. The girls had each drawn a dream jar and some girls told us about a dream they had:

My dream is that I wish that I had a unicorn as a pet. Jaanhavi

My dream is sitting in the garden and having pink lemonade and reading a book. Not with my brother or sister! Katie

The final part of our assembly was about James and the Giant Peach and whilst reading this novel we explored themes of friendship and teamwork. As James becomes friends with some minibeasts in the story, we also did a small topic on minibeasts at the same time.

The Primary 3 girls really enjoyed their assembly and here are some of their favourite parts:

I liked the singing the Enormous Crocodile. Eva

I enjoyed singing all the songs. Fleur

I liked saying my line, I liked singing 'The Enormous Crocodile' and I liked seeing the crocodile trap. Eryn

I liked dressing up in yellow. Zoe

I liked singing 'I have a Dream' by Abba. Amelia

I liked taking part and saying my lines. I loved it when my daddy came to watch. Katie

I liked saying my line and seeing that everyone was listening. Bess

I liked it when the parents were clapping. Isabelle