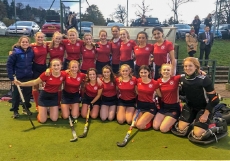 The 1st XI hockey team competed in the 1st XI East District tournament on Friday 8th November. After some speculation as to whether the tournament would go ahead due to frozen pitches at MES, the second pool of matches were relocated to St George's. The first game played was against Fettes; the girls put in a strong attacking performance winning the game comfortably at 2-0. Our 1st XI won all other games in the pool comfortably to set them up well in order to progress through to the semi-finals. The game to decide who would go top of the pool was against George Watson's; both teams put in solid performances, with chances at each end. However, George Watson's took advantage of a turnover from a St George's hit out with 30 seconds to go and came away with a 1-0 win. In the semi-final the girls lost to a strong tournament-winning MES side. Having gone down reasonably quickly in the game our girls managed to compose themselves well in defence and create a few goal scoring chances. This is the strongest performance in the 1st XI East district tournament St George's has produced in a number of years and the girls should be extremely proud of reaching the semi-finals in a competitive tournament. 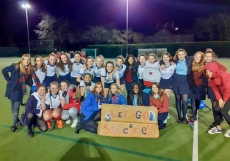 On Thursday 14th November the Lower 5 “A” Hockey team played their second round Scottish Cup fixture against Loretto School. St George’s started very well and had a number of chances to score but found the Loretto goalkeeper in good form. Towards the end of the half we took the lead with Ariadna scoring at a penalty corner. In the second half St George’s attacking play paid off, with further goals from Ariadna and Kate. Loretto scored towards the end of the game to leave the final score 4-1. The girls now progress to the quarter final and will face St Columba’s at home.

Last week the Lower 4 hockey team participated in the Fettes U13 invitational tournament. They had a competitive draw in their pool with Edinburgh Academy, Cargilfield and Craigclowan. They had strong performances in each match. The girls particularly enjoyed playing short corners for the first time - defending solidly and also managing to score from an attacking corner, much to the girls’ delight! A very strong Cargilfield side went through top of the group and second place was a tie between our girls and Edinburgh Academy. Unfortunately due to goal difference, Edinburgh Academy went through, meaning we faced Kilgraston in a 3rd/4th play-off and won 1-0, finishing the afternoon on a high.