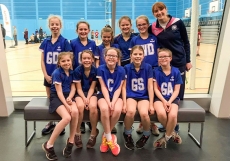 On Monday 13th January, a Primary 6 team from St George’s took part in an ESSPA Netball Tournament for P6 pupils from Edinburgh. We left school at 9.15 and went to the Oriam facility at Heriot-Watt University.

We played a round-robin against different schools. It was a ‘friendly tournament’ so the scores weren’t the main thing (but we were keeping track of them!) We played against Bruntsfield, Towerbank, Corstorphine, James Gillespie’s, and St. David’s. We won every game except with Towerbank, where we drew 2-2. There was also a shooting competition and we scored the most goals. The tournament took all morning and we had a packed lunch afterwards. 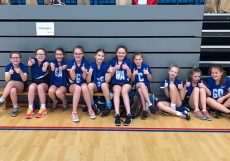 We liked it that we rotated subs and our netball positions. It was really good to try out different positions and some of us now have a new favourite! It was really good fun and we can’t wait to do something like this again. Next year we are also looking forward to doing proper competitions with medals! Many thanks to Miss Collins, our netball coach, for this opportunity.