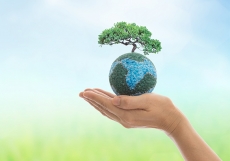 Currently, the news is filled with stories of environmental disasters: flash floods, landslides, and wildfires, along with updates on the climate disaster and the problems with plastics. We feel it is important to spread some good cheer, so here are some of our top stories about how citizens are trying to make a positive change to our planet.

Renewable energy is on the rise

The European Investment Bank will stop funding most fossil fuel projects. All new energy projects must produce less than 250 grams of Carbon Dioxide for each 1 kW of energy produced per hour. This will exclude the majority of fossil fuel projects, unless they include new technologies, such as carbon capture, mixing fossil fuels with renewable energies, or combining heat and power generation.

This year, the UK became the first major economy to pass laws to end the contribution to global warming.  The new law has set a target of 0% net greenhouse gas emissions by 2050, whereas previously the target was to reduce levels by 80%, showing the changing attitudes of the UK government.

After the teen activist, Greta Thunberg, criticised world leaders for their lack of action against climate change, the European Union proposed a ‘Green New Deal’. This aims to slash fossil fuel dependence throughout the EU. Furthermore, the EU is on the verge of agreeing to the commission’s ‘Clean Planet for All’ strategy, which aims to ensure that the EU economy is meeting the Paris Agreement targets. The strategy states that emissions from any EU country will have to fall to a net-zero level by 2050 so that Europe can lead the way in the new age of sustainable living.

Lego is taking sustainability to the next level

The company ‘runs on 100% renewable energy, recycles 90% of its waste and continues to increase energy efficiency in its operations’. Beginning in 2011, Lego pledged to only use packaging material certified by the Forest Stewardship Council in the foreseeable future. Even though most of their bricks are plastic, they offer some sugar cane alternatives, and renewable energy is a sustainable way to mitigate the effects of their plastic bricks.

Morrisons is offering unsold boxes of food, past its ‘best before’ date, through an app called Too Good to Go with boxes worth at least £10 being sold for £3.09. It is the first supermarket in the UK to offer unsold fruit, veg, bakery, and deli items nationwide in their 494 supermarkets in a move to help customers on a budget and reduce their food waste. It was first trialled and then started on the 29th of November. Morrisons expects to distribute 350,000 boxes of unsold food in 2020. This will reduce CO2 emissions by 882 tonnes: the equivalent of driving from London to Edinburgh 5,351 times.

China is renowned for its pollution problems but scientists and researchers from the Institute of Earth Environment at the Chinese academy of sciences have built an experimental tower in Northern China which is dubbed ‘the world’s biggest air purifier’, which they say seems to be working. The researchers have proposed that they have seen improvements in the air quality over an area of more than three square miles in the past months. The tower works when polluted air is sucked in by the tower, heated up by solar energy, and then circulated through multiple layers of cleaning filters. Even during the winter, when Xian in Shaanxi province is especially prone to air pollution, many locals have noticed a difference in air quality.