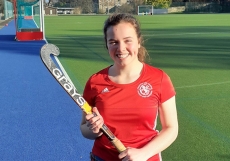 Congratulations to Georgie (Lower 6) who represented Scotland U18 for the first time during the holidays in matches against Ireland in Dublin. The games were closely contested, with Ireland winning two games narrowly and the other ending in a draw.