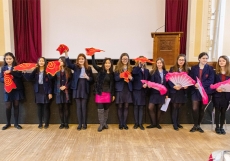 On Thursday the 6th of February, our Upper Four Chinese class lead an assembly about the Chinese New Year in front of the Upper School.

We began by having a song about the Chinese New Year playing as everyone entered the hall with our class by the stage dancing with fans and spinning handkerchiefs. Once everyone was sitting in their seats, we presented a PowerPoint giving information about Chinese New Year, for example, that people from China set off fireworks to ward off the evil spirits and they eat lots of fish at the time of Chinese New Year. 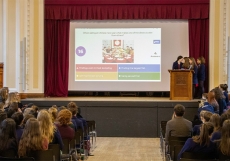 After the PowerPoint, we had a Kahoot competition with the house captains, vice-captains, and another member from their house representing each house. The Kahoot had questions in it that everyone learned the answers to from the PowerPoint presentation and people in the audience helped their house captain to tell them which answer was correct. In the end, Lindsay won the Kahoot competition.

Our class had lots of fun presenting the assembly and we hope that the audience enjoyed it and learned a lot from it about Chinese New Year too.