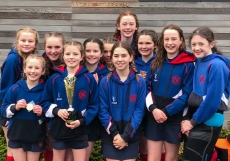 On Friday afternoon the Lower 4 hockey team participated in the East District Tournament. They had a competitive draw where they played Edinburgh Academy ‘B’, Heriot’s, George Watson’s, Boroughmuir and Trinity. They had strong performances in each match. The girls particularly enjoyed playing an adapted attacking corner. After the section matches a very strong Heriot’s and George Watson’s went through to the Cup Competition.

St George’s had a mix of wins, draws, and losses and qualified for the second-tier Plate competition where they faced Fettes in the semi-final. Following a very competitive game, the result was decided by running penalties and St George’s were the winners.

The final was against North Berwick and St George’s scored some excellent goals to win convincingly 5-0. The girls were delighted to receive the trophy and medals for the Plate Competition.

Well done to all the girls who participated.