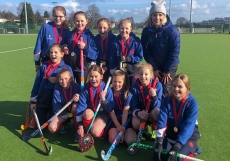 On Saturday the 29th of February, the St George’s P6 hockey team took part in the Erskine Stewart’s Melville Schools Primary 6 Hockey Festival. This was a very exciting morning for the team being their first hockey tournament for the school. Their first match was against Compass. An end to end first match for both teams resulting in a 3-2 win to St George’s.

Next, the girls were up against Dollar with a more comfortable win of 3-0 to the St George’s team. George Watson’s had the better edge in the third and final match of the group stage for St George’s putting our girls as runners up of the group getting them into the semi-finals. As a result, they were drawn to play Mary Erskine’s who were winners of their group. Having played 3 very competitive matches, the girls were now ready for their semi-final match and played an outstanding game scoring 3 goals to put them into the final against George Watsons.

The final match of the morning was fast-paced and end to end. Both teams worked so hard throughout, but St George’s just had the upper hand in the final minutes of the game to score the winning goal of the tournament. What a fantastic result to such a hard-fought morning for our Primary 6 hockey team, winning the ESMS Primary 6 Hockey Festival.

Well done to all of the girls for such hard work and determination.