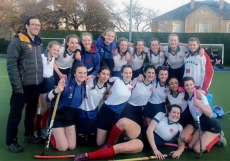 On Thursday the Lower 5 'A' Hockey team had their much-anticipated semi-final match with Strathallan.  Having won our friendly fixture earlier in the season the girls were confident but focused. The game started with an early goal for Strathallan from a penalty corner, which spurred St George's into action and we had a 2-1 lead by half-time thanks to goals from Ari and Sophie. In the second half, St George's further goals came from Ari and Kate and despite some late pressure, the girls came away with a good 4-2 win.

We wish the girls the best of luck!