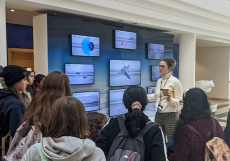 For World of Work Day, some of the Lower 4’s went to Leonardo and we had an amazing time learning about engineering!

Firstly, we got cool lanyards with our names and nationalities on them - we felt like proper engineers that worked in the company. Then we met some of the staff members and they told us a bit about their company. They explained that Leonardo makes a lot of different types of radars and lasers. These are used for security in different places like football stadiums, airports, and for military forces. They also mentioned that there are many routes to having a career in engineering, for example having an apprenticeship or going to university.

We then learned a little bit more about the development of the company and found out that it was built in 1943. It was originally one building, but another building was built because the company was vastly developing, and more space was needed for labs and training rooms. We then began our tour; we were all amazed and very inspired. We saw the different labs and where all their equipment was made and tested.  We also went to the environmental engineering department, which was the most industrial lab on-site, and they test equipment in the area they will be used in - it was amazing! 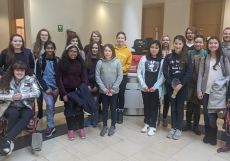 Finally, we went to see some of their most popular radars and lasers, which were the Sea Spray, Vixen and Dragon Fire. The Sea Spray is a radar that would examine the surroundings and look for distressed signals, this advanced technology would see very small things that were very far away. The Vixen is a radar that is used in speed jets and is at the nose of the plane, and the Dragon Fire was a very powerful laser that is similar to the lasers in Star Wars!

Our amazing time at Leonardo was about to end but we asked a few more questions. They told us that only 20% of their workforce were women but they want to encourage more women to work in this industry. We all enjoyed our time at Leonardo and this experience has inspired a lot of us to pursue this as a career when we are older!