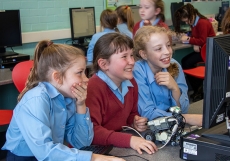 In ICT, Primary 6 have been working on their programming skills in anticipation of a robot programming competition in each class! We were put into pairs and used the Lego Mindstorms app to learn some basic programming skills. Mrs. Rice took us to the smartboard and showed us some helpful videos.

On the 10th of March, during ICT, the P6P competition took place. We had to program our robots to move mini houses into different areas of the board. In some areas you got more points than others but if you landed in the white and black line you didn’t get any points. We were given two and a half minutes to do this. Some groups’ robots did a little dance because they didn’t program the robot right! It was really fun and exciting watching the other groups trial and error. 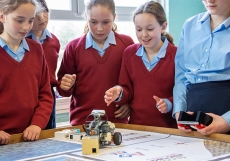 Once everyone had had their turn, there were three groups tied at eleven points, so they went again. Although it was a close competition, in the end, there was an overall winner, Blue Jim which was programmed by Sophie and Amber.

We all really enjoyed the robot competition and we hope to do something like it again!