The Lower 5 'A' Hockey team have had a fantastic season, culminating in a historic win on Friday 6th March to clinch the Scottish Cup!

Their route to the final was as follows:

Scottish Hockey wrote the following report about the final: 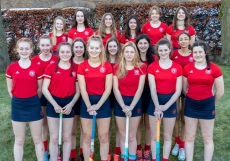 A tremendous atmosphere sent both sides into this contest to give it their all, and the game roared from end-to-end from the first whistle.

The longer the first half progressed St George’s School began to edge the play. Sofia came close with a low shot that fizzed just past the post.

In the closing minutes of the first half pressure from George Heriots put pressure on St George’s and found the defence resolute to deal with the danger.

St George’s began to apply pressure early in the second half and Ariadna came so close to opening the scoring with an improvised effort, twisting in mid-air and slamming the ball into the ground, but her effort bounced just wide of the post. 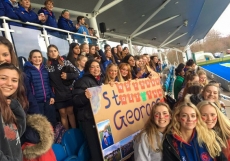 Olivia was next to come close for St George’s but her low shot slipped just wide of the mark.

The opening goal eventually arrived when a sensational run and strike by Kate opened the scoring to make it 1-0 St George’s School with nine minutes to play.

It was a tense close to the contest but St George’s School held out to win the trophy in a great final.

We would like to say a big 'thank you' to all the pupils, parents and staff who came to support the team on Friday and indeed throughout the season!